The magical music of Matthew

Born blind, a 14-year-old boy has become a virtuoso who sees colors within the most intricate sounds of music.

"I hear notes when I play my piano and I see colors, too," Matthew said. “I don't know exactly how I do it, but my brain shows colors." (Taylor Ballek | Spectrum Health Beat) Matthew loves music. He can play many different instruments, including the piano. He can play a song after only hearing it one time. (Taylor Ballek | Spectrum Health Beat) Matthew tunes his guitar. "He has perfect pitch, according to all of the music teachers," said Connie, Matthew's mom. "He can hear down to the minute decibel of sound." (Taylor Ballek | Spectrum Health Beat) Before Matthew was born, he hemorrhaged in utero. Matthew and his mother have different blood types. "I'm A-negative and he's B-positive," Connie said. "My antibodies were eating his platelets. We were fighting each other through the entire pregnancy." (Taylor Ballek | Spectrum Health Beat) Matthew was born 8 and 1/2 weeks early and came out weighing 2 pounds and 9 ounces. Three months after Connie and Matthew's dad, Matt, took him home, Matthew developed hydrocephalus, a buildup of fluid deep within his brain. (Taylor Ballek | Spectrum Health Beat) Doctors suspect it arose from the hemorrhage he suffered as a fetus. Excess fluid in the brain can cause nausea, vomiting, vision problems and even coma and death. It is a lifelong problem. (Taylor Ballek | Spectrum Health Beat) Matt cuddles with Matthew on the couch in their home in Gaylord, Michigan. After a shunt revision in February, Matthew is back to playing music and thriving. He is now cleared for yearly check-ups. (Taylor Ballek | Spectrum Health Beat) Matthew plays on the ground with his dogs. He often likes to sing songs about them. (Taylor Ballek | Spectrum Health Beat) "For Matthew, each pitch he hears conjures up a specific color in his mind. This is called synesthesia and it is an incredibly rare characteristic," Sova said. A recent study suggests less than 4 percent of the population experience synesthesia. (Taylor Ballek | Spectrum Health Beat) 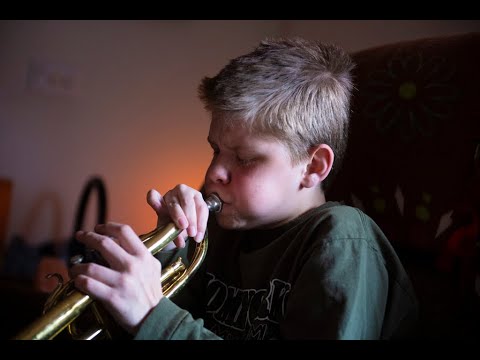 Matthew Madej, 14, is an inquisitive boy who loves music.

And vacuum cleaners. He owns 29 of them—different makes, models and styles.

When he received birthday money, he snubbed video games and sports equipment and instead bought another vacuum cleaner.

When you speak with the Gaylord, Michigan, resident, his questions are many.

He’s a music lover, but he doesn’t just hear the music. He says he can see it, in full color.

That’s about all Matthew can see. Due to complications in utero, he was born with optic nerve damage, leaving him legally blind. He also suffers from cerebral palsy.

“I hear notes when I play my piano and I see colors, too,” Matthew said. “I don’t know exactly how I do it, but my brain shows colors.”

His interests and abilities are unique, said his mom, Connie Madej.

That mirrors his entrance into this world.

Connie had given birth to a daughter four years prior, so she knew what to expect with a son. Or so she thought.

“With Caleigh, I got huge,” Connie said. “With Matthew, I was tiny.”

But there lurked a much more serious issue than the size of her abdomen. They had conflicting blood types.

“I’m A-negative and he’s B-positive,” Connie said. “My antibodies were eating his platelets. We were fighting each other through the entire pregnancy. We were killing each other.”

Matthew hemorrhaged in utero and Connie and her husband, Matthew Sr., rushed to a hospital in Northern Michigan, where doctors delivered Matthew Jr. on Nov. 28, 2004.

A winter storm had grounded the helicopter that day, so an ambulance had to transport Matthew to Spectrum Health Helen DeVos Children’s Hospital in Grand Rapids.

The hemorrhage left him legally blind and caused other brain issues.

“He looked like a baby bird,” Connie said. “He was just skin and bones.”

‘We couldn’t even hold him’

“We couldn’t even hold him,” Connie said. “He had to have platelets. That was the hardest thing to watch because they’re so little and it takes like 12 hours to put a small amount of platelets into their system. He fought through it all.”

Prior to discharge, hospital staff taught Connie and Matt how to feed their son with a tube down his throat.

Fortunately, they never had to.

“We got all the equipment and stopped on the way home to give him food,” Connie said. “It’s like he was so happy to get out of the hospital, he sucked down a bottle. We didn’t have to put the tube down his throat.”

Matthew developed hydrocephalus, a buildup of fluid deep within his brain. Doctors suspect it arose from the hemorrhage he suffered as a fetus.

“His head got so big,” Connie said. “You could put your pinkie finger between the bone plates in his head. They think when he hemorrhaged at birth that a piece of blood got between his third and fourth ventricle and it just built up on his brain.”

Excess fluid can cause nausea, vomiting, vision problems and even coma and death, he said.

“In Matthew, this is especially difficult, because it’s like the fluid-like balloons have many small balloons inside them, any one of which can get bigger,” he said. “This makes it particularly challenging to drain them adequately.”

Dr. Szymzcak said Matthew is doing well, despite the challenges. His attraction to music is inspiring.

“Every time I enter Matthew’s room, he has a different musical instrument at hand,” Dr. Szymczak said. “I’ve spent many occasions at Matthew’s exclusive hospital recitals. Also, I’ve been trying to sneak guitar lessons from him. I really appreciate Matthew. He’s a great kid and he has wonderfully supportive parents.”

The children’s hospital has become a source of comfort to him.

“He knows everyone there—the desk lady, the nurses, the techs, the people in the MRI room, the people in pre-op and the people in post-op,” Connie said. “Everyone stops in the hallway and says, ‘Hi Matthew.’ It’s not just one department. It makes him feel great.”

Spinal fluid contains protein that is different from the protein in the rest of your body.

“His protein was so sticky that it was blocking the flow of fluid in the shunt,” Connie said. “They want it in the 170 range. His was 800.”

“Everything looks good,” Connie said. “The doctors said we don’t have to come back for a follow-up for a year. We had been going every two weeks. They don’t want to keep putting Matthew through all the stress. He freaks out, worrying, ‘Am I going to get admitted? Is my MRI going to be good?’”

And although he’s a seventh-grader with special needs, he’s “smarter than a whip,” she said.

What he’s lacking in vision he has gained in hearing.

“He has perfect pitch, according to all of the music teachers,” Connie said. “He can hear down to the minute decibel of sound.”

“They know he likes to tune,” Connie said. “When he tunes things, he sees colors. A certain note is a certain color. My daughter played flute from sixth to 12th grade. Every one of her solos, and after listening to her play it, he would play it on the piano. No vision. No music.”

“Among Matthew’s unique abilities is his automatic perception of color when hearing sounds and music,” Sova said. “For Matthew, each pitch he hears conjures up a specific color in his mind. This is called synesthesia and it is an incredibly rare characteristic.”

It’s difficult to know how many people experience synesthesia, but a recent study suggests less than 4 percent of the population, according to Sova.

“Equally as impressive is Matthew’s ability to have perfect pitch,” Sova said. “When he hears a sound, he immediately knows what that sound’s pitch is. For example, he could hear the sound of a car horn on the street below his hospital room and announce, ‘That’s a D-flat.’ This comes in handy for me, because he is always able to tune my instruments perfectly for me.”

He’ll give Sova a chord progression to play on the guitar, then improvise a melody line on top of the chords.

“Sometimes he’ll give me a tricky chord to play and I’ll have to ask him if I’m playing it right,” she said. “He usually plays songs written for his beloved dogs (Zoey and Ellie) or his parents.”

Music therapy brings a sense of normalcy to Matthew’s hospital stays, since he so loves playing music at home.

“We have also been able to utilize Matthew’s love for music and conducting as motivation during his sessions with physical and occupational therapy,” Sova said. “When working on increasing his time standing, we had him stand and conduct while I played a song. When working on walking, we played music with a steady beat to encourage stepping on the beat.”

Because music is such a major part of Matthew’s life, it continues to provide comfort and motivation.

Sova’s excited for his future.

“I can’t wait to see where his kind spirit, incredible talents and love of music bring him in life,” she said.